Why I rejected Jonathan, supported Buhari in 2015 – Amaechi 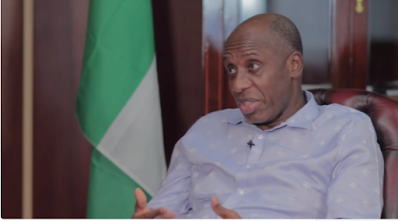 The Minister of Transportation, Chibuike Amaechi, has claimed that former President Goodluck Jonathan offered him every opportunity to remain in the Peoples Democratic Party, PDP, but he rejected it.

The minister says he went ahead to support President Muhammadu Buhari in 2015 because he is not tribalistic.

The former governor of Rivers State was speaking in Port Harcourt on Saturday while receiving some party members who defected from the PDP.

The minister explained that whatever he says in Rivers State would happen, adding that he would soon return to declare prayers in the state.

He claimed that God gave him victory over Goodluck Jonathan in 2015.

“You know, when Goodluck fought us, he was not fighting me, he was fighting God and I knew he would fail.

Tell them from next year prayer will start, I will come to Port Harcourt like I used to come and I will say this will happen and it will happen.

‘If I were tribalistic, President Goodluck Jonathan offered me the opportunity to remain in PDP, he offered me all sort of opportunities and I said that I have given my allegiance to Buhari because I am not tribalistic.”