Anxiety over CJN’s health as he misses SANs’ inauguration 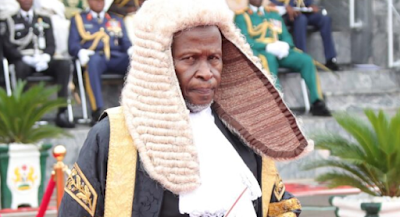 Where is Ibrahim Tanko Muhammad, the chief justice of Nigeria (CJN)?

Amidst rumours that he had been ill, he was on Monday absent at the swearing-in ceremony of 72 senior advocates of Nigeria.

The 66-year-old chief justice has not been seen in public for weeks.

The special session for the swearing-in of SANs, which was held at the supreme court in Abuja, also marked the beginning of the 2020/2021 legal year of the apex court.

The unavailability of the CJN is unusual as he is mostly known to carry out important functions such as this.

The CJN had inaugurated eight justices of the supreme court on November 6 but since then, there are conflicting details on when he was last seen in public.

Although no reason was officially given for his absence, It was learnt that he had been ill and was due to be flown abroad for treatment.

However, before he could be flown out, he reportedly caught an infectious disease.

NigerianEye was unable to ascertain his whereabouts on Monday as nobody was willing to volunteer information.

Represented at the swearing-in by Bode Rhodes-Vivour, justice of the supreme court, the CJN said: “The judiciary, like no other arm of government, had suffered a great deal of internal and external shocks in the course of the year.

“In the course of the year, we lost some of our colleagues in the bench and the bar.

Muhammad said the SAN rank which is a fervent desire of every legal practitioner only comes by way of “hard work, perseverance, endurance and courage”.

“You must roll up your sleeves and get down to work with unrestrained enthusiasm and dexterity; then you can begin to coast home to victory,” he said.

However, he warned the senior lawyers not to use their position of authority to disobey court orders.

“Obedience of lawful court orders has no alternative in any sane society. A threat to this is simply a call for anarchy,” he said.

“I believe strongly that there is no right thinking citizen of this country who will tread that path of infamy. We must respect and duly observe all the tenets of an enduring democracy.

“Nigeria is not a lawless society and no one, irrespective of his or her status, should turn it into one.

“Most times, some persons who, by sheer stroke of providence, find themselves in position of authority, flagrantly disobey lawful court orders, and even make a boast of it.

“Such acts will henceforth not be condoned. In fact, they will be met with severe consequences. we must extinguish such raging fire before it consumes us.”