VIDEO: : How American pastors laid hands on, prayed for Trump before Biden’s certification 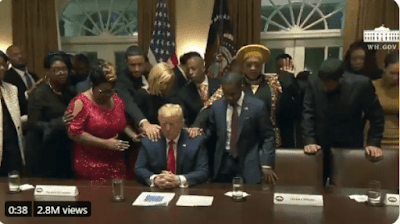 On January 6, 2021, a group of Christian ministers laid their hands on President Donald Trump and prayed for him for victory the same day Joe Biden was certified by Congress as US President.

The video surfaced on the twitter handle of Diamond and Silk. The pastors, mostly blacks were seen laying their hands on Trump and praying for him profusely.

The president closed his eyes as they prayed for him, but after that prayer, Trump did the unimaginable.

He incited a mob to invade the Capitol in a bid to snatch victory from Biden through the back door.

All the forces of darkness cannot stop what God has ordained. (Isaiah 14:27) The devil meant it for evil but God turned it around for our good. pic.twitter.com/vD8JkgLWGl

On the same day, the US President mounted pressure on Republican Senators to reverse the wish of the American people.

He also tried to pressurise Vice President Mike Pence to discredit the Electoral College to make the poll invalid.

A courageous Pence never yielded to Trump’s pressure, as he said he did not have the power to do so and could not go against the US constitution.