Eto’o names player that will replace Messi at Barcelona 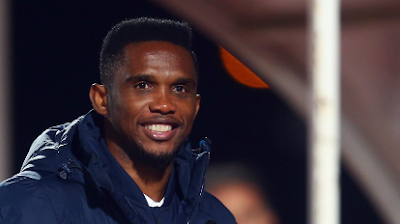 Former Cameroon striker, Samuel Eto’o, has said Ansu Fati is the player capable of filling the void Lionel Messi will leave when he eventually leaves Barcelona.

Messi is out of contract this summer and is yet to agree fresh terms with the Spanish giants.

Eto’o spent five seasons playing alongside the 33-year-old and previously claimed Barcelona would need to change their name if Messi leaves.

However, he has named 18-year-old Fati as the next big thing at the Camp Nou.

“I think (Fati) is the one for the future,” Eto’o told SPORTbible.

“He’s currently doing amazing stuff, so I think the club really needs to groom him and take very good care of him.

“Let’s hope he’s the one to take over from Messi.”Ju

Fati began this season in fine form with five goals and four assists in 10 games, before he suffered a major knee injury in November and remains sidelined for a number of weeks.