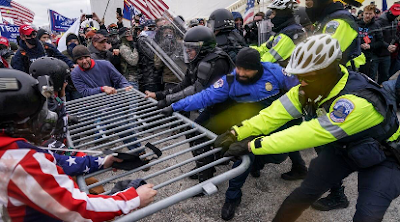 Four persons have died and 52 arrested after supporters of President Donald Trump stormed the U.S. Capitol on Wednesday, protesting to stop the Congress from certifying Joe Biden’s election victory.

According to Metropolitan Police Department, Chief Robert J. Contee, said 47 of the 52 arrests to date were related to violations of Mayor Muriel Bowser’s 6.00 p.m. curfew.

Twenty-six of those arrests were made on the U.S. Capitol grounds.

Several others were arrested on charges relating to carrying unlicensed or prohibited firearms.

Contee further stated that two pipe bombs were recovered from the headquarters of the Republican and Democratic national committees.

A cooler containing Molotov cocktails was also recovered from a vehicle on U.S. Capitol grounds.

”Three other people also died on Wednesday because of medical emergencies, and 14 police officers were injured – two of whom remain hospitalised.” he added.

Lawmakers who officially confirmed Biden as the country’s 46th president and Kamala Harris as Vice President, were under heavily-armed guard after police regained control of the Capitol in Washington.