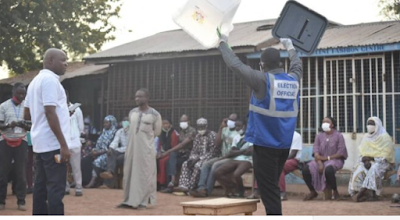 Two officers of the electoral commission of Ghana have been arrested for allegedly tampering with ballot papers as the country’s presidential election held on Monday.

It is a tight race between Nana Akufo-Addo, incumbent president of Ghana, and his former rival, John Mahama.

Although Akufo-Addo of the New Patriotic Party (NPP) and Mahama, former president of Ghana — who is contesting on the platform of the National Democratic Congress (NDC) — are both seeking a second and final term in office, there are a total of 12 candidates participating in the exercise.

According to the electoral commission, 17,027,655 voters are registered to participate in the election.

A statement by the commission on Monday noted that the officers – identified as Mary Adatsi and Ahmed Shafawu – are currently in police custody.

“The Electoral Commission wishes to inform the General Public that the two officers who tampered with the Presidential ballot papers in Awutu Senya West and Bawku Central have been arrested and are currently in Police custody,” the statement read.

“In the case of Bawku Central, only one of such ballots was used. However, in the case of Awutu Senya West, none of the ballots were used.

“The Commission assures the general public that the officers will be prosecuted and dealt with by law.”

However, while the exercise has remained largely peaceful, there had been concerns about missing voter identification cards, but the electoral commission said affected persons would still be allowed to participate in the poll.

“The Electoral Commission wishes to inform the General Public that all Voters whose Voter Identification Cards are missing can still vote on 7th December, 2020,” a statement by the commission, on Sunday, read.

“Voters should go to the polling stations where they registered and mention their names to the Officers who will then look for their names in the Name Reference Lists.”

Voting is expected to end at 6pm on Monday.