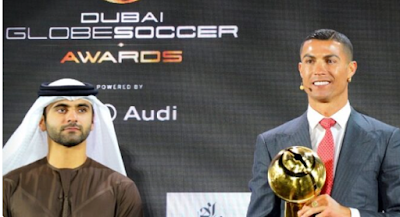 Cristiano Ronaldo, a Portuguese football star, was on Sunday night named Player of the Century at the Globe Soccer Awards in Dubai.

The Juventus star was rewarded for his football exploits and the successes he enjoyed from 2001 to 2020.

The former Manchester United and Real Madrid player snagged the award in person at a ceremony held at the Armani Hotel, beating longtime rival Lionel Messi to the prize.

Globe Soccer, the middle east-based football body and organiser of the award, also announced their choice of the five-time Balon d’Or winner on its website.

Ronaldo started his football at Sporting Lisbon in Portugal before moving to Manchester United where he won a UEFA Champions League (UCL) trophy.

He, thereafter, joined Real Madrid in 2009 for a then world-record £80 million fee and won four more UCL trophies at the Santiago Bernabeu stadium before moving to Juventus in 2018.

Extolling Ronaldo’s “exceptional talents”, the organizers reeled out the 35-year-old’s trophies and achievements for both club and country, including some of his individual honours.

“Ronaldo’s incredible record speaks for itself – the clubs he has played for and the victories he has had with teams like Manchester United – three Premier League Cups, one FA Cup, two League Cups, an English Super Cup, a Champions League and a Club World Cup,” it wrote.

“And as if that wasn’t enough there are also his great triumphs with Juventus – two Championships and an Italian Super Cup, and with Portugal, which Cristiano had never won trophies with before, but then managed to help win the European Championship in 2016 and the Nations League during the 2018-2019 season.

“The individual trophies Ronaldo has won also testify to his exceptional talents – among many others he has won the Golden Ball five times, the Golden Boot four times, and no fewer than eleven Globe Soccer Awards – he is also known for his impressive record in three of the most competitive European Championships, the Premier League, la Liga and Serie A.”

Reacting to the award via his Twitter handle, Ronaldo expressed his excitement at receiving the recognition.

Couldn’t be happier with tonight’s award! As I’m about to celebrate my 20th year as a professional footballer, Globe Soccer Player Of The Century is a recognition that I receive with so much joy and pride!@Globe_Soccer #globesoccer pic.twitter.com/sAIl3V8ezz

“Couldn’t be happier with tonight’s award! As I’m about to celebrate my 20th year as a professional footballer, Globe Soccer Player Of The Century is a recognition that I receive with so much joy and pride! @Globe_Soccer #globesoccer,” he wrote.

Other winners at the 2020 Globe Soccer Awards are Robert Lewandowski (Player of the Year), Pep Guardiola (Coach of the Century), Gerard Pique and Iker Cassilass (Player Career Awards).

Real Madrid were named the Club of the Century while Bayern secured the team award for 2020.