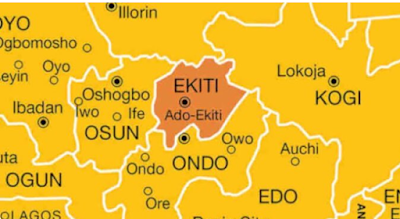 An angry mob is said to have beat up a middle-aged man to death after he was accused of trying to kidnap a seven-year-old boy.

According to NAN, a source in the community alleged that the deceased man trailed the boy while he was returning home from a school programme at Iludofin area of Omuo Ekiti on Saturday, and dragged him to a nearby bush.

An alarm was reportedly raised and angry residents were said to have attacked the suspect and beat him to death.

“The suspect was trailing the boy home from school. When he realised that he had reached a bushy footpath, he pounced on him and started dragging him into the bush,” the source said.

“But a man who was looking from afar raised an alarm and the people caught him in the act and beat him.”

Sunday Abutu, the Ekiti police public relations officer, confirmed the incident and said security agents tried to rescue the suspect, but he died at the station.

“The mob action was very thick, but the police tried and rescued him and the intention was to first take him to the station for cover, before rushing him to the hospital for medical attention,” he said.

“Unfortunately, he died in the station as a result of the severe beating.”

According to Abutu, the police have begun investigation into the matter.

The PPRO cautioned residents to avoid taking matters into their own hands as every suspect is presumed innocent until found guilty.