Bianca opens up on what Biafra warlord, Ojukwu told her about Nigeria’s survival 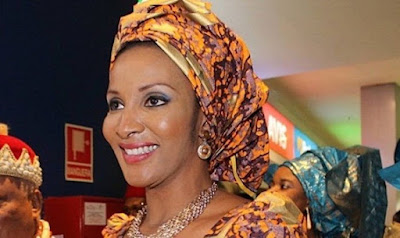 Bianca Ojukwu, Nigeria’s former Ambassador to Spain, has opened up on what her late husband, Chukwuemeka Odumegwu Ojukwu, told her about Nigeria’s unity and survival as a political entity.

Mrs. Bianca Ojukwu said her late husband always lamented the fact that Nigeria seemed incapable of lifting itself out of mediocrity and degeneration, adding that it paid lip service to national unity and constructive development.”

She told Sun Newspaper that her late husband would feel vindicated in the spirit world, particularly with the rise in the clamour for restructuring.

She noted that the country is stumbling from one crisis to another, adding that today Nigerians are witnesses to the situation Ojukwu anticipated and warned against so long ago.

“He always maintained that the unity of any country that is guaranteed solely by force of arms cannot be sustained and that Nigeria’s unity can only be assured if oppression and marginalization of certain of its ethnicities is addressed and resolved.

“Since those who are continually denied justice have no interest in peace it goes without saying that in a matter of time pent-up frustrations erupt and explode like a keg of gunpowder. Dim Ojukwu has come to be known as the man who saw ahead of his time,” she added.

She said that nothing concrete has been done by the government to change the situation since her husband’s predictions, adding that Ojukwu was one of the earliest advocates of restructuring.

According to her, the late Biafra warlord knew without doubts that the 1960 independence was a distorted and unbalanced package of federalism

She said Ojukwu till his death kept hammering on the fact that in order for the country to survive, it must equitably accommodate all its federating units.