INEC speaks on postal voting in Nigeria ahead of 2023 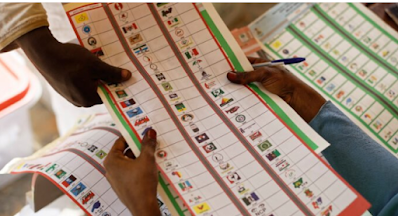 The Independent National Electoral Commissioner (INEC) has weighed in on the debate about Nigeria’s capability to introduce postal voting ahead of the 2023 elections.

In an interview with TheCable, Festus Okoye, a national commissioner, said although the commission is committed to deepening the use of technology in the electoral process, postal voting would require a “functional and robust postal system”.

But an official of the Nigerian Postal Service (NIPOST), who declined to be named because she was not authorised to speak, said the service does not have the infrastructure to support postal vote in the next general election.

Okoye, who is the chairman of INEC information and voter education committee, said the system would require amending the relevant electoral laws.

What is postal voting? Ballot papers are mailed to voters who vote and return by post for onward transmission to the election centres. In the United States where almost half of the voters – 65 million people – voted by mail in the just concluded presidential election, the ballot papers, upon arrival at the processing centres, are photographed, converted to text and sorted.

With just about 20 months left before the next general election in Nigeria, some have argued that postal voting would help in addressing some loopholes in the electoral process especially with regards to violence at the polling units.

Okoye, however, disclosed that Nigeria’s postal system is “not in the best shape” for electorate to vote by mail, and if that is addressed, another challenge would be amending the electoral act.

He said although the electoral act empowers INEC to determine electoral procedures, the commission is also restrained by parts of the law that prescribe specific routine for the conduct of elections.

For instance, sections 49(1) and 52(3), respectively, require voters to be present at the polling unit and that votes must be cast through open secret ballots with the use of ballot boxes.

Okoye said: “The commission has made elaborate recommendations to the national assembly to amend sections 48, 49,50, 53, 54 and other ancillary provisions to introduce electronic voting machines and other technological solutions in the electoral process.

“The commission will also embark on comprehensive and far reaching update of the existing voters register and the continuous registration of voters. The commission and the Nigerian people are attuned to the deepening of technology in the electoral process.

“We want to introduce electronic voting machines and gradually migrate to Internet voting and the use of other electronic platforms and solutions. Mail-in ballots and postal voting depend on a functional and robust postal system.

“Our postal system is not in the best shape and did not fundamentally upgrade in line with technological changes in the world. Even in advanced democracies, the postal system still struggles to cope with the volume of mail in ballots and postal voting.”

He said the chances of adopting mail-in ballots and postal voting in Nigeria is “rather remote” and will involve “a change in the electoral legal framework”.

‘NIPOST NOT READY FOR POSTAL VOTING’

Franklyn Alao, NIPOST’s general manager for corporate communications was unavailable for cooments, but an official of the service disclosed the agency is not ready to be deployed for postal voting.

The official said this is is because of the lack of adequate investment in its operations coupled with security challenges.

She also spoke of the sophisticatication of the US Postal Service (USPS) which TheCable found out has 31,300 post offices compared to NIPOST’s 955.

She said: “The government has not invested in NIPOST for them to have the capacity to handle that. They have to look at the welfare of our staff. If the staff are not adequately taken care of, they can compromise.

“The US postal service is one of the highest paid organisations in the US. But at NIPOST, we are just collecting the normal civil service salary.

“During our own elections, you know there used to be violence and we are not adequattely protected for that; they can burn down our offices and hijack our mail vehicles along the road. We don’t have the security to handle that for now.”

Another senior member of NIPOST staff said that voting by mail will be beneficial to many Nigerians and will also lead to a spike in number of votes in elections.

“Mails can be sent to people; they will just do their voting and send it back (and) it will be less stressful,” said the official who also asked not to be named.

“They won’t have to leave the comfort of their home to go and queue up in the sun coupled with the violence in the polling stations.”