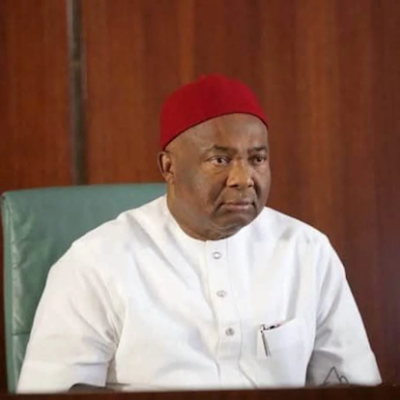 Following the continuous detention of the Imo House of Assembly lawmaker representing Ohaji-Egbema State Constituency, Cyriacus Okoro Heclus over alleged assault, his constituents have taken to the streets, demanding his immediate release.

It was gathered that leaders, women and youths of Ohaji-Egbema on Tuesday staged protest and mounted road blocks at each major junction in the LGA.

The protest, according to reports, has led to the shutting down of oil companies in the area.

Speaking to journalists, Prince Carly Ugochukwu Nwokoma who is a leader in the LGA, said that the arrest and detention of their lawmaker by the order of Imo State Governor is a humiliation to the entire people of Ohaji-Egbema and can no longer be accepted by them.

He lamented that Ohaji-Egbema people have suffered numerous maltreatment from the present government of Imo State.

He declared, “the continuous detention of our lawmaker will cripple the revenue of the Federal and State governments, because the oil companies operating in the LGA will remain shut.

“Until our House Member is released, there won’t be peace both in our community and the state at large.”

The detained lawmaker and four other constituents were arrested on Friday 13th November 2020 on the Governor’s order due to an alleged face-off between himself and another House member.

Heclus Okoro was said to have been attacked by some of his colleagues at the government House for allegedly being against the purported impeachment of Chiji Collins as the Speaker.

Meanwhile, the magistrate Court sitting in Owerri will give its ruling on the matter today, November 18, 2020.