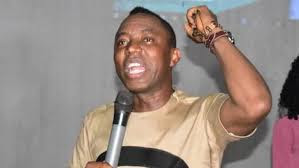 Activist and Publisher of Sahara Reporters, Omoyele Sowore, has called on students to take to the streets to protest against the Federal Government for failing to bring an end to the strike embarked on by the Academic Staff Union of Universities eight months ago.

Sowore, who is the leader of the #RevolutionNow Movement, said this in a tweet on Tuesday.

The activist said he would also take part in the protests once the students have made up their minds.

He tweeted, “#EndAsuustrike. Let the students languishing at home organise a mass protest to force the Muhammadu Buhari regime to end the destiny destroying strike, I will join, they’ve got nothing to lose! The reason they don’t care is because their kids don’t go to school in Nigeria! #RevolutionNow.”

However, ASUU opposed the introduction of IPPIS as the payment platform, claiming that it did not take care of their peculiarities and insisted that they would rather use the University Transparency and Accountability Solution.

The disagreement between both parties has led to the closure of all government universities for the last eight months.