I see myself as a redefinition of democracy, says Obaseki 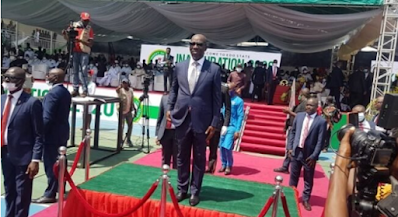 Godwin Obaseki, governor of Edo state, has described himself as a “redefinition of democracy”.

He stated this on Thursday at the swearing-in ceremony for his second term in office, held at the Samuel Ogbemudia in Benin City, the Edo capital.

The event marked the inauguration of the governor and Philip Shaibu, his deputy.

According to Obaseki, it is time to do away with politics of division and ensure equitable distribution of resources to improve the lives of the people of the state.

“That I stand before you here today is a testimony to the awesome power of God Almighty and to the indomitable will of the great people of Edo state,” he said.

“My reelection represents a new hope. I see myself as a vessel in the redefinition of democracy in Nigeria and I am not unaware that this places enormous responsibilities on me.

“It is pertinent to state that there are many sides to our victory which we are relishing today. Aside from the fact that it restores hope in democracy as a form of participatory government, our victory also offers an opportunity for us to bridge the gap between a challenged past and a promising future.”

Obaseki, who contested on the platform of this PDP, had defeated his closest rival, Osagie Ize-Iyamu of the All Progressives Congress (APC) in the September 19 governorship election.