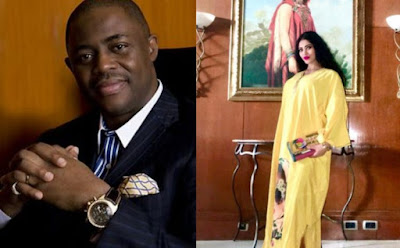 Former Nigerian Aviation Minister, Femi Fani Kayode alias FFK and an Egyptian lady identified as Nesma Galal have sparked dating rumours after they romantically gush over each other.

It all started after the lady posted a photo of FFK, describing him as the greatest and kindest man in the world.

“My sun is rising My beautiful moon. All my stars my everything in my life”, she added.

Reacting to the lady’s post, FFK called her “My Hatun”, an honorific word for women, equivalent to the English term “My lady.”

This is coming after Fani-Kayode separated from his fourth wife, Precious Chikwendu.

However, Nesma Galal’s profile stated that she is still single.

She also profiled herself as a Director in media line, beauty, fashion and travel.

“My dad a general in the Egyptian army,” she added.

Fani-Kayode’s first wife was Saratu Attah, daughter of former Kwara governor, Adamu Attah. They got married when he was 22. The marriage lasted between 1987 and 1990. They had a daughter together.

Next was his marriage in 1991 to Yemisi Olasunbo Adeniji.

The marriage collapsed after three years, with Yemisi already pregnant with the couple’s third child.

In 1997, FFK married again, a Regina Amonoo. This was when he was in Ghana, during the Abacha years.

He did not tie the nuptial knots again, until 2014, when he met Precious Chikwendu.