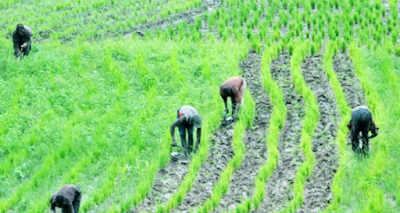 Samuel Ortom, governor of Benue state, has asked President Muhammadu Buhari not to reverse the ban on rice importation.

Speaking in Makurdi, the state capital, on Monday, Ortom said the ban has created wealth for rice farmers.

The governor asked the president not to yield to the pressure of lifting the ban as a result of the recession in the country.

He added that the sector has now improved youth employment.

“The ban on rice importation remains a major milestone in the development of agriculture in Benue. We want to appeal to the federal government to continue with the policy,” Ortom said.

“There might be hardship for a little while but farmers are smiling to their banks now compared to what used to happen. I have been into farming since 1984 and I am a living witness to this development.

“Before now, when we cultivate rice, we were not able to sell even the cost of production but today things have changed. Just harvest, the market is already there.”

The Central Bank of Nigeria (CBN) restricted forex for rice importation after the 2016 recession to encourage local production.

Two weeks ago, the National Bureau of Statistics (NBS) announced that Nigeria has officially slid into its worst economic recession in over three decades.