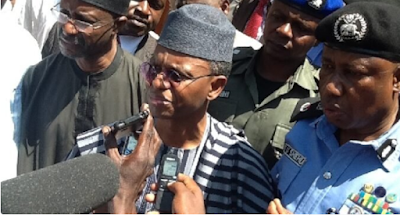 Nasir el-Rufai, governor of Kaduna state, has lamented over the insecurity in the country, saying he is frustrated and almost helpless.

Speaking when he featured on Politics Today, a Channels Television programme, el-Rufai said many of his counterparts also feel frustrated.

He said governors are just chief security officers without having control over security agencies.

“I am frustrated in my state. Many governors are frustrated in their states. We are called chief security officers only in name, but we have no control over coercive instruments of state,” he said.

“We’re all frustrated. We are almost helpless. The #EndSARS protests clearly showed the limits to the control of governors over the police and the army. Some of us have more influence than others. But to a large extent, you ask the commissioner of police to do something, he has to clear with the IGP.”

I am frustrated in my state. Many governors are frustrated in their states. We are called chief security officers only in name, we have no control over coercive instruments of state... we are almost helpless - Gov Nasir El-Rufai on killings and insecurity. #PoliticsToday pic.twitter.com/t9BaNjQMmo

El-Rufai said insecurity has grown from bad to worse because a sizeable number of police officers who should be fighting criminal elements in the country are involved in non-police duties like “carrying the bags of the wives of very important personalities”.

“We’ve always made a very strong argument that one centralised police in a federation does not work. Nigeria is the only country in the world that is a federation that has only one police force,” he said.

“The number of policemen we have in Nigeria is inadequate; it is less than half of what we need and a lot of them are engaged in non-police duties like carrying the handbags of the wives of very important people.

“We need to have a large footprint of policing in Nigeria and the only way to achieve that in a fast-track manner is to amend the constitution and put police on the concurrent list as recommended by the APC True Federalism Committee so that we have more policing.

“So, what are we afraid of? Let us just amend the constitution and allow state policing and in fact, go further and allow the local governments to have their own police. That way, we will have more security footprints.”