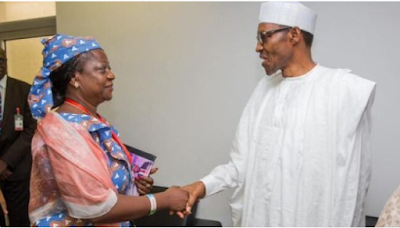 The Nigeria Civil Society Situation Room has asked President Muhammadu Buhari to withdraw the nomination of Lauretta Onochie, his social media media, whom he appointed as a commissioner of the Independent National Electoral Commission (INEC).

But reacting in a statement, Clement Nwankwo, convener of Situation Room, said the nomination of Onochie is an attempt to weaken the efforts to build a credible electoral process in Nigeria.

Quoting the 1999 constitution, Nwankwo said paragraph 14 forbids a “partisan politician” as a member of the electoral body.

He urged the senate to disregard her nomination if the president fails to withdraw it.

He also asked the senate to investigate the other nominees as they might have been nominated based on “self-serving interest”.

“The Nigeria Civil Society Situation Room is concerned about the nomination of Ms. Lauretta Onochie, Senior Special Assistant to the President on Social Media as National Commissioner of the Independent National Electoral Commission (INEC) representing the South-South,” the statement read.

“Ms. Onochie is a known partisan supporter of President Muhammadu Buhari and his ruling party, the All Progressives Congress (APC).

“Item F, paragraph 14 of the third schedule of the 1999 Constitution of Nigeria (as amended) forbids a partisan politician as a member of INEC – a body charged under the Constitution to unbiasedly conduct of free and fair elections.

“Her nomination amounts to a major attempt at undermining efforts to build credibility for an improved electoral process in the country.

“Situation Room calls on President Muhammadu Buhari to immediately withdraw her nomination. Should the President fail to withdraw this nomination the Nigerian Senate is hereby called upon to disregard her nomination without any consideration whatsoever.

“It is important for Nigeria that the composition of INEC is transparently non-partisan and independent of partisan political manipulation.”