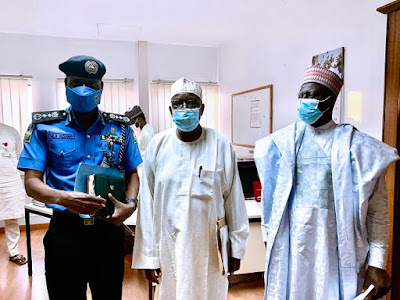 The Chief of Staff to the President, Prof Ibrahim Gambari, on Tuesday, October 13, 2020, met with the Director-General of the Department of State Services (DSS), Yusuf Magaji Bichi and the Inspector-General of Police, Mohammed Adamu, to discuss on the extensive police reforms.

This is coming after the Inspector-General of Police, IGP M.A Adamu, on 11th October 2020, dissolved the Special Anti-Robbery Squad (SARS) across the 36 State Police Commands and the Federal Capital Territory (FCT) where they hitherto existed after a presidential directive.

The IGP during his speech noted that the dissolution of SARS was in response to the yearnings of the Nigerian people and that all officers and men of the now defunct Special Anti-robbery Squad would be redeployed with immediate effect.

As part of the Police reforms, the Inspector-General of Police, Mohammed Adamu on Tuesday set up a new police unit, SWAT Team to replace the disbanded Special Anti-Robbery Squad (SARS).

Adamu said it will fill the gaps arising from the dissolution of the defunct SARS.

Prospective members of this new team will undergo psychological and medical examination to ascertain their fitness and eligibility for the new assignment.