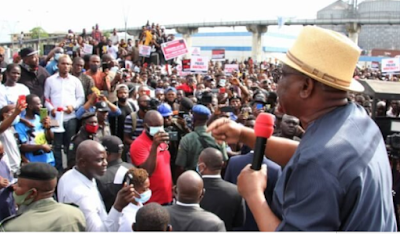 Nyesom Wike, governor of Rivers state, on Tuesday joined the protesters he banned from trooping to the streets over police brutality.

Organisers of the #EndSARS protest in Rivers were putting final touches to their plan when the governor announced that all protests in the state had been banned.

The governor, who directed security agencies to arrest violators of the ban, had said there was no need for further protests since the SARS unit had been scrapped.

“The Rivers State Government hereby [wishes] to inform the general public that all forms of protests have been banned throughout the State. Therefore, all proposed protests under #EndSARS Campaign are hereby prohibited,” Wike had said in a statement Paulinus Nsirim, his information commissioner, issued on his behalf.

“Government took this decision because the Inspector General of Police, Mohammed Adamu, had already scrapped the Special Anti-Robbery Squad. Therefore, there is no need for any form of protest against a Unit of the Police Force that no longer exists.

“Law enforcement agencies are also directed to ensure that the ban is enforced and that violators are brought to book.”

But aggrieved residents took to the streets of Port Harcourt, Rivers state capital, in defiance to the directive of the governor.

However, he later identified with the protesters, alleging that SARS killed more people in Rivers than in any other state.

Wike said no other governor condemned the excesses of SARS like he did.

The #EndSARS campaign has gained momentum across the country and beyond, with protesters blocking major highways as a means of pressing home their demands.

A panel set up by President Muhammadu Buhari to see to the reformation of the police has approved the demands of the protesters.