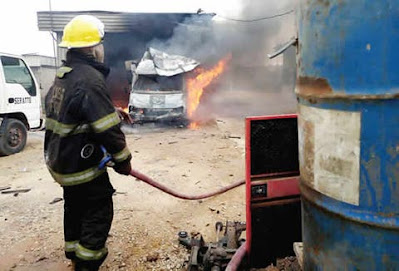 The Senate on Wednesday, directed its Committees on Petroleum Downstream and Gas Resources to investigate the recent gas explosions in Lagos State.

The two panels were asked to probe the remote and immediate causes of the explosions with a view to preventing reoccurrence and report to the Senate in two weeks.

The Senate took the decision following a point of order moved by the Senator representing Lagos West Senatorial District, Solomon Adeola, on the issue.

The red chamber also observed a minute silence in honour of innocent Nigerians that lost their lives in the unfortunate events.

Adeola had while presenting his motion, explained that on September 24, 2020, a massive gas explosion occurred at Cele Bus Stop, Iju-Ishaga in the Ifako-Ijaiye Local Government Area of Lagos State.

He noted that the explosion caused serious body injuries to no fewer than 44 persons and destroyed 36 buildings including a church, an event centre and a plank market.

He said the resultant inferno destroyed 26 vehicles within a radius of 300 metres of the explosion.

He said the incident totally destroyed multi-billion naira properties and businesses of many citizens.

He said a tanker exploded from sparks of a running power generator in the plant and claimed the lives of 18 people.

He also said 25 houses and 16 lock-up shops filled with goods worth millions of naira were burnt.

He said the Tanker Owners Association in Nigeria estimated that over 80 per cent of all articulated vehicles as the ones involved in these incidents lacked safety protocol requisite to their operations and plying of public roads.