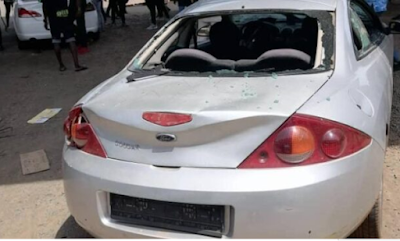 Some thugs have attacked Nigerians protesting against police brutality in Abuja.

The thugs, who were armed with cutlasses, invaded the protest venue at Berger junction about an hour after the #EndSARS protesters had convened.

They harassed the protesters, including passers-by, destroying vehicles parked in the area.

At least five cars were destroyed, while an unconfirmed number of the protesters sustained injuries.

The protesters, however, regrouped within minutes and started chasing the thugs away.

One of them was caught and beaten to near-death, with serious injuries inflicted on his head and limbs.

Two of those at the scene claimed the attackers were “Fulani youth,” but NE could not independently verify their identities.

“The Fulani youth arrived as we were gathered here and started chasing everybody with matchet and destroying cars,” a protester who identified himself as Andrew said.

Another protester alleged the attackers were sponsored, saying: “The police failed to stop us and now they are sponsoring thugs. This is just the beginning.”

Anjuguri Manzah, a spokesman of the FCT police command, did not immediately respond to enquiries regarding the incident.

The protest is part of a nationwide #EndSARS movement which started as an opposition against the now-dissolved special anti-robbery squad (SARS) of the Nigeria police force, notorious for abuse of human rights.

See them with sticks. pic.twitter.com/QXK7ues0W5

Now in its seventh day, the agitations follow demands for the police and federal government to among other things, ensure justice for victims of police brutality and release all arrested protesters.