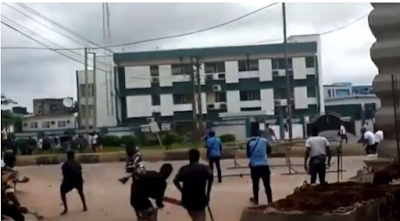 The #EndSARS protest has taken a different turn in Edo state as protesters have blocked major roads in Benin, the state capital.

A witness who spoke with TheCable on Sunday said many youths have become violent.

He said hoodlums have taken over major roads, streets and pedestrian footpaths mostly around Ekheuan, Ugbowo and UNIBEN road.

Although he said deaths were reported, he couldn’t confirm the number of casualties.

The witness, who said the protest is gradually losing its essence, added: “Yesterday, some boys drove past during the protest and sprayed money in the air.

“This protest also shows the quality of youths we have in different states. In Lagos, they are focused and know what they want. But here, no focus, nothing. For them, it is just an opportunity to misbehave and do all sorts.

“They have been extorting trailers and drivers, burning tires. Cars cannot pass and those that must pass have to pay. The same complaint about SARS is the same thing they are doing. They are shouting #EndSARS but they are not ending any SARS because they are doing worse than SARS.”

Some protesters in the state also lost their lives when some hoodlums attacked them on Friday.

Since the commencement of the protest, there have been several reports of attacks across major cities.