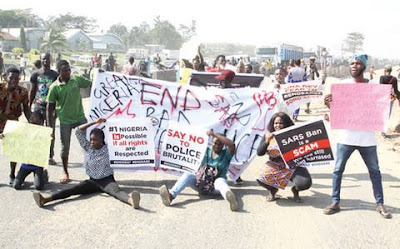 The Nigeria Governors Forum on Monday called for a judicial commission of inquiry to review cases of police brutality, especially by operatives of the disbanded Special Anti-Robbery Squad across the country.

The governors appealed to #EndSARS protesters to end the protests to prevent hoodlums from hijacking it.

This was contained in a communique issued by NGF after the 20th emergency teleconference meeting held on Sunday.

In the communique, which was signed by the NGF Chairman, Kayode Fayemi, said the governors deliberated extensively on the nationwide protests, riots, and demonstrations.

He said the “Governors thereafter Resolved to: Activate a Judicial Panel of Enquiry to receive all cases of police brutality by officers of the disbanded SARS Unit. Each State is also expected to kickstart a compensation mechanism for all victims.

“Endorse the call by demonstrators for improved governance predicated on an enforcement regime that takes into cognisance the fundamental human rights and liberties of all citizens in the country;

“Act on all the Demands made by the EndSARS protesters raising some concerns with the shifting nature of the demands which creates uncertainty on the exact expectations and ultimate goal;

“Finally, appeal for the call off of protests as a continuation grossly exposes the fragile economic fundamentals of the country; particularly as criminal elements and hoodlums have hijacked the protests by maiming innocent citizens, looting and destroying properties.”