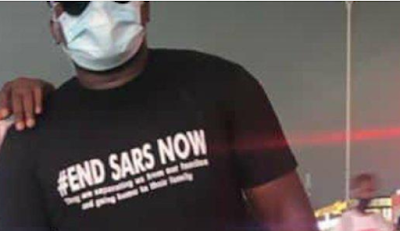 One of the #EndSARS protesters who was attacked by suspected thugs in Abuja is dead.

Anthony Onome, the victim, was stabbed on Saturday when he and other agitators protesting against police brutality were attacked by suspected hoodlums in the Kubwa area of the nation’s capital.

NigerianEye had reported how the suspects attacked the protesters in Abuja.

Onome was later taken to the National Hospital, Abuja, where he died while receiving treatment.

Haastrup identified the deceased as one of those in the hospital’s morgue but said he could not confirm where he had been brought from.

Onome was admitted in the hospital and transferred to the intensive care unit before he passed on.

A source said he had lost so much blood before he was admitted to the hospital.

Several videos of him posted on social media showed how he was struggling to walk after losing so much blood from a wound on the head.

The protest is part of a nationwide #EndSARS movement which started as an opposition against the now-dissolved special anti-robbery squad (SARS) of the Nigeria Police Force.

Now in its 11th day, the protesters are demanding a better welfare and improved governance.

While the protest has continued peacefully in most parts of the country, some of the agitators have come under attack in various places, including Abuja, Lagos, Osun and Edo.

On Sunday, after meeting President Muhammadu Buhari, Senate President Ahmad Lawan and Femi Gbajabiamila, speaker of the house of representatives, urged the protesters to leave the streets and give the government a chance to carry out their demands.