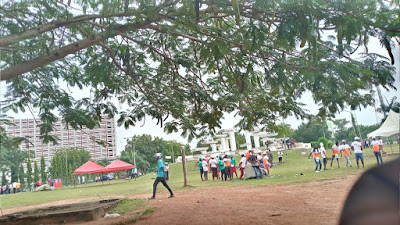 In what appears to be a counter move against the End SARS protesters, Pro-Special Weapon Tactics (SWAT) have occupied the iconic Unity Fountain in Abuja.

The protesters donning shirts and caps with #We support SWAT are currently holding what looks like a carnival at the venue.

SWAT is the new unit announced by the Inspector General of Police, Muhammed Adamu as replacement to the defunct Special Anti Robbery Squad. But the End SARS protesters have rejected the formation of the new unit.

The End SARS protesters had initially planned to occupy the Central Bank of Nigeria building at the Central Business district, but were reportedly attacked by hoodlums in the early hours of Monday.