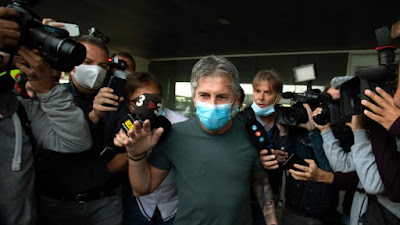 Barcelona captain, Lionel Messi’s father, Jorge Messi, on Wednesday met with the Blaugrana president, Josep Maria Bartomeu, in the hopes of reaching an agreement for the Argentine international to leave Camp Nou this summer.

According to the Spanish newspaper, Sport, the discussions were not believed to be productive.

Messi, 33, had hoped to push the club closer to an agreement by allowing his father, who also acts as his agent, to talk openly with the club hierarchy about his situation.

But Bartomeu and the rest of Barca chiefs are not budging from their position.

It is understood that Jorge argued that Messi should be allowed to leave the La Liga giants due to the clause in his contract that allows him to leave for free.

Barcelona, however, insists that there is no such clause, and maintains that Messi will not be leaving the club.

The meeting took around an hour and a half, and remained cordial throughout, despite both parties not being able to reach any kind of agreement.

Bartomeu was joined by director Javier Bordas de Togores, while Jorge had Messi’s brother Rodrigo and lawyer Jorge Pecur to back him up.

Jorge is understood to have said on multiple occasions during the meeting that: “My son doesn’t want to stay here [Barcelona].”

But after meeting with Bartomeu and Javier, he appeared to be a little less outspoken.

Messi has been strongly linked with a move to Pep Guardiola’s Manchester City in the past few days.