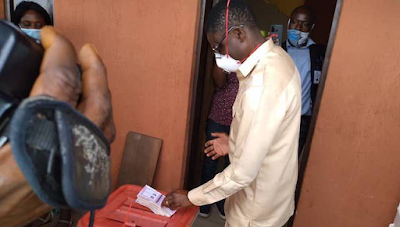 The Edo state deputy governor Philip Shaibu, has expressed confidence that Governor Godwin Obaseki and the PDP, will come out victorious in the governorship election.

“I am optimistic that we will win the election. You know I am a man of the people and we have a technocrat as a governor.

“People who ordinarily would not have come out to vote are all here, so I am expecting bigger victory for us.”

Shaibu who expressed satisfaction with the turn out of voters, however said that it would have been more if not for the intial tension that followed the electioneering campaign.

“I have never lost election before. I am a grassroot politician and a man of the people. The crowd would have been more than this, but I think as times goes on, people will turn up for the election.

“Don’t forget this is my community and whether there is gunshots or not, they must stand by me.”

The Deputy governor confirmed the peaceful conduct of the election.

“You know at this time of election, things are usually peaceful, things get worse during collation of result.

“I heard that in some stronghold of the governor, card readers are not working well, but I am yet to confirm that,” he said.