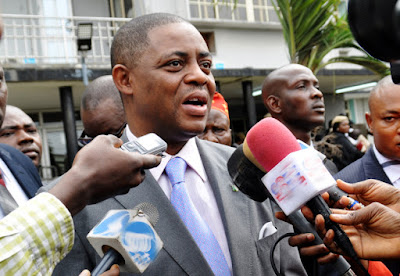 Femi Fani-Kayode, former minister of aviation, has apologised to Eyo Charles, a Daily Trust reporter, he insulted at a press conference.

The ex-minister, who began a tour of some states, especially those controlled by the Peoples Democratic Party (PDP) states in July, visited Cross River last week.

At a press conference in Calabar, Cross River capital, Charles had asked Fani-Kayode if anyone was bankrolling his trip.

But the former minister, who felt offended by the question, described him as “very stupid”.

“I could see from your face before you got here, how stupid you are. Don’t ever talk to me like that. Who do you think you’re talking to. Bankroll who? You think I am one of those ones you… from who, when, how? You have a small mind, a very small mind,” he had said.

His comments had generated a backlash, with at least two chapters of the Nigeria Union of Journalists (NUJ) boycotting his activities.

The ex-minister had initially refused to apologoise to Charles, saying his apology was for his “friends in the media”.

But speaking at a press conference at government house, Uyo, capital of Akwa Ibom, on Friday, Fani-Kayode said he disappointed himself and everyone.

“I’m deeply sorry for the manner I reacted to the said reporter. I was too hard on him. The question was mischievous, but I fell for it,” he said.

“I should have been smarter than that. I am using this opportunity to reach out to him, and I hope he will be kind enough to forgive me. I disappointed myself, my family and friends, my colleagues and even my bosses, those who hold me in high esteem.

“I have regrets, it was not my finest day. No leader or public figure should ever react like that. I disappointed myself. I deeply regret it and I believe it will never happen again.”