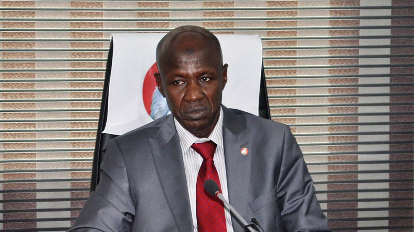 The suspended Acting Chairman of the Economic and Financial Crimes Commission (EFCC), Ibrahim Magu, has said that the purported interim report of his probe did not emanate from the Presidential Panel.

Lawyer to Magu, Wahab Shittu, disclosed this in a statement made available to newsmen on Sunday.

He quoted Chairman of the panel, Justice Ayo Salami, as ruling on his application against the media report.

Magu was arrested on Monday, July 6, 2020, and dragged before the panel.

The panel has been sitting for 40 days, excluding 14 weekends and public holidays.

Shittu revealed that he confronted the panel with the consequence of the purported interim report in certain sections of the media.

The lawyer said he urged the panel to take judicial notice of the publications and the need to take necessary action against the purveyors.

Shittu quoted Salami as insisting that the report is based on the figment of the authors’ imagination.

Wahab further quoted Salami as saying: “The story arising from the so-called interim report is not from us.

“What should concern you and your client is what the chairman said. Inviting the promoters of the story will not serve any useful purpose as they will not disclose their sources of the story. The purported story is a figment of their imagination.”