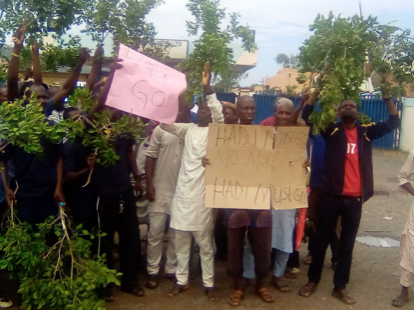 Workers of Adama Beverages Ltd, a Yola-based company owned by former Vice President Atiku Abubakar, are protesting alleged maltreatment by the management of the company.

Adama Beverages Ltd, which produces bottled water and fruit juices, distributes its products under the famous brand, FARO, across Adamawa State and much of the rest of the north.

The workers, however, massed out Tuesday bearing green leaves and placards, asking that the Indians managing the company should quit.

“Only Nigerians we need”, one of the placards proclaimed.

Another placard reads, “Hadi Must Go.”

Hadi, reporters were told, is the name of a Nigerian management staff of the company said to be in cohort with Indians who run the company to malign the workers on the lower cadres.

The lower carder workers who are Nigerians told newsmen that the Indians who are the top managers call the Nigerians monkeys and generally treat them with disdain.

Our correspondent learnt Tuesday that the protests started on Monday when casual staff reported to work and were told to return home as production had stopped.

Shedding further light on the immediate cause of the workers’ protests, the Senior Staff Association of Food Beverage and Tobacco Employees (FOBTOB) of the company said management erred by not informing the casual workers ahead of time that they would not be needed for now.

Jackson explained also that even permanent staff joined the workers’ protest because eleven of them were issued queries by Management on the accusation that the eleven were instrumental to unautorised meetings.

“We take exception to the queries because, if nothing else, we feel this is not the time to issue query to anybody,” he said.

Jackson, however, took exception to the insistence by the protesting junior workers that the Indian managers should quit.

“That’s what the junior workers are saying, but we as workers, senior or junior, did not emply the Indians, so we have no standing to ask them to go,” Jackson said.

The casual workers refused to go home as directed, nor did the permanent staff agree to work; therefore all the workers of the company occupy the main gate of the company, leading to a shutdown of all operations, at least up to Tuesday evening.

The management staff were not forthcoming when approached by reporters for their side of the workers’ protest.

The Group Chief Operating Officer of the company, Mr. Francis Vazheparambil, told newsmen that he had no mandate to speak to them.