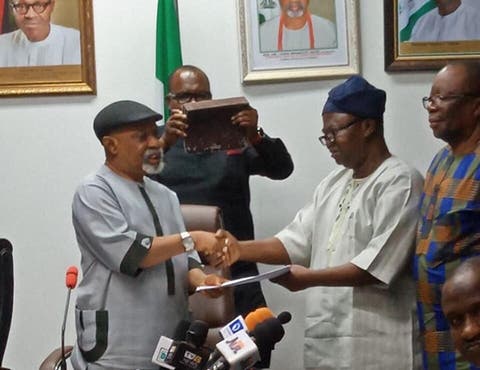 The Academic Staff Union of Universities on Tuesday told the Federal Government that the University Transparency and Accountability Solution, which it developed as an alternative to the Integrated Payroll and Personnel Information System is ready for integrity tests.

According to ASUU, the software for UTAS was unveiled and demonstrated to the Minister of Education and senior management staff of the Ministry of Education, including the Executive Secretary of the National Universities Commission, Prof. Abdulrasheed Abubakar, on Monday.

The national President of ASUU, Prof. Biodun Ogunyemi, made this known during a press conference held at the Gwagwalada campus of the University of Abuja, attended by almost all its national officers.

But Ogunyemi maintained that it would not suspend its ongoing strike until the Federal Government honours its 2019 agreements.

“It is our sincere hope that the government would not renege on its promise because the benefits of UTAS to the university system (both public and private) cannot be found in any other software in Nigeria today. Now that the union is close to meeting the government’s demand on an alternative to IPPIS, it is our sincere hope that the substantive issues in the ongoing strike action would be given the desired attention,” he added.

The ASUU president also lamented that five months’ salaries of their members at the University of Maiduguri and the Michael Okpara University of Agriculture, Umudike are still withheld by the Accountant-General of the Federation on account of non-registration on IPPIS.

“Thousands of other academics across the Universities are suffering the same fate. So, while we counsel that government at both the federal and state levels must meet the Taskforce specified guidelines for reopening of educational institutions, we insist that all the arrears of the withheld salaries of our members in federal and state Universities must be paid immediately to pave for further discussion on the outstanding issues in the Memorandum of Action of February 7 2019,” he added.