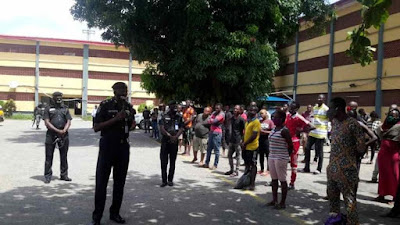 The Lagos State Police Command has disclosed that it arrested 121 persons for violating the curfew time imposed by the government, Monday, to relax the lockdown aimed at containing the spread of the COVID-19 pandemic.

Also, 58 persons were arrested for not wearing face masks while 79 vehicles were impounded during the curfew hours.

Spokesman for the command, DSP Elkana Bala, who made the disclosure in a statement issued to Vanguard, said the arrested suspects alongside 148 others arrested over the weekend for violating lockdown order, were charged to Court, thereby bringing the total number of suspects charged to court Tuesday alone, to 325.

He said, ” They were sentenced accordingly. Some of the suspects were given four hours of community service while others were awarded fines between N2,500 and N3000 respectively.


” The Commissioner of Police Lagos State, CP Hakeem Odumosu and other senior officers went round the State on the first day of the curfew to monitor the level of compliance and the CP was impressed, and looks forward to huge improvement in the coming days.