Osimhen rules out Serie A move 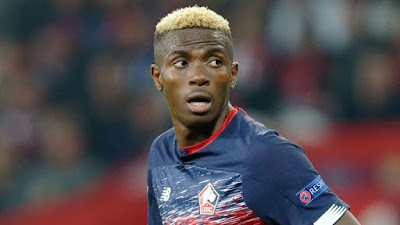 Lille striker Victor Osimhen has reportedly stated that he is unlikely to play club football in Italy despite receiving concrete offers from top Serie A clubs.

Osimhen is courted by Italian clubs AC Milan, Inter Milan and Atalanta, following his blistering start to his Lille career in the French Ligue 1.

He has also been linked with a switch to Chelsea, Liverpool, Manchester United, Tottenham, Barcelona and Real Madrid.

Signed last summer for €12m from Sporting Charleroi, the Nigerian has been a serious revelation in Ligue 1 over the course of the 2019/20 campaign, scoring 18 goals and providing six assists in all competitions before the season was suspended due to the coronavirus outbreak.


Osimhen still has over four years left on his contract at Lille, which means any interested suitor will have to splash out big to sign him.

“Osimhen has however decided that he will not be going to Italy, whatever happens, despite several offers from Serie A,” a report on French website, La Voix du Nord, says.

Lille President Gerard Lopez has indicated his desire to keep Osimhen, unless he receives a huge offer in the summer.

Osimhen has considerable interest from England, but nothing is close to concrete yet. The player and the Lille board are due to speak in the next two weeks to take a definitive decision, a source close to the player said.