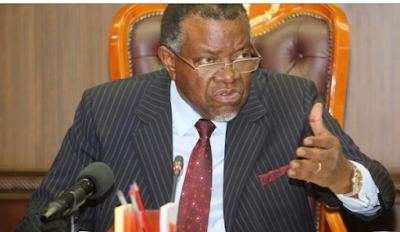 Geingob, who announced the ban via his Twitter handle on Thursday, said the decision was inspired by the “difficult period of COVID-19.”

He also directed a cap on monthly fuel consumption by public office holders.

“Government will not order a new vehicle fleet for the Executive and Public Office Bearers for the period 2020-2025,” he wrote.

“Savings of 200 million Namibia dollars (about $10.8 million) will be directed to urgent priority areas.”

Government will not order a new vehicle fleet for the Executive and Public Office Bearers for the period 2020-2025. Savings of 200 million N$ will be directed to urgent priority areas. Below is the statement issued by The Presidency to that effect: pic.twitter.com/6FLnAdf7xd
— Hage G. Geingob (@hagegeingob) May 14, 2020

A statement he shared added that by “constantly directing government offices, ministries and agencies to do more with less,” major savings across the government system have been achieved over the past five years since Geingob.

“Government spending has been reduced by 9%, annual travel and subsistence allowances have been cut by 62%,” it added.

The country has so far recorded 16 cases of the coronavirus.