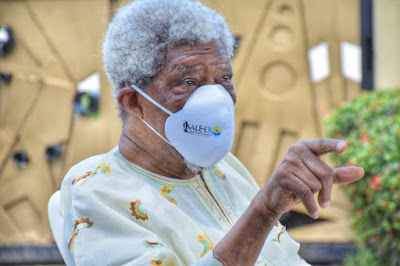 Femi Okunnu, a senor advocate of Nigeria (SAN), says fearless judges like the late Isiaka Oluwa, a retired judge at the high court of Lagos, are presently lacking in Nigeria.

Okunnu, who spoke with TheCable and some selected journalists at his Lagos residence on Thursday, said the country’s justice system has experienced a fall in standard over the years.

According to him, the deceased, who passed away at 102, was an “upright” judge who served Lagos state and the country during his lifetime.

Asked to compare the late Oluwa with contemporary Nigerian judges, the octogenarian said: “Very different. In those days, we had fearless, upright judges. Today, not so. The standards have fallen.

“As a high court judge, when we talk of a judge being upright, it doesn’t apply to many of the young judges now in Nigeria. But it was very much applicable to Justice Isiaka Oluwa. He was an upright judge.

“If you come late to his court by one minute than the fixed time, you are out. At exactly 9am, Oluwa will be seated inside the court to dispense justice.”

The former federal commissioner for works and housing buttressed how the late judge convicted Jimoh Ishola, better known as Ejibadero, for killing some land owners over a protracted land dispute in 1975.

He explained Ejibadero’s efforts to contest the judgement came to nothing with the appeal court and supreme courts affirming Oluwa’s earlier verdict.

He added that the qualities of the late Oluwa inspired several lawyers during his lifetime, including himself, to strive for uprightness.

Okunu said the deceased’s remarkable career impacted on the Lagos State University (LASU),  when he was pro-chancellor and chairman, governing council.

“When he was the pro-chancellor, LASU was the best in criminal law in Nigeria. The school was number one,” he said.

He also described COVID-19 as “a very dangerous thing,” appealing to Nigerians to ensure strict compliance with the various guidelines by health authorities.

“For your own sake, I pray and beg you, observe the rules, keep social distance. You don’t know who by accident or whatever carries the virus. Keep social distancing, wear the masks to cover your nose,” he said.

“It’s a very dangerous thing. See how it has restricted our movement. It has turned the economy upside down because there is no work, lockdown.”