Pastor Adeboye under attack for advising ‘his son’ to sack secretary 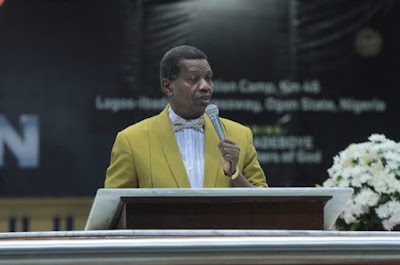 Pastor Enoch Adeboye of the Redeemed Christian Church of God, RCCG, has come under attack for advising ”his son” to sack his secretary.

NigerianEye had reported that Adeboye on Twitter said headvised one of his sons to sack his secretary because he (Son) became too fondof her and was always excited to see her at work.

Adeboye was quoted as saying, ”One of my sons once told me that he was always excited to resume in the office every Monday because he would get to see his secretary again. ”

But, in reaction, some Nigerians on social media queried Adeboye for making the lady jobless. Some claimed that the situation should not warrant a sack.

”@@FeralJack_, ”Wait sir, you told your son to fire somebody and take their source of income away from them, not because of a Wrong they did, but because of your son who can’t keep his feelings in check? Is this Just? Is this what Jesus would do?

”I just can’t believe this! What is this? You cannot teach your son to keep his focus on his wife and business, you will rather throw another person into sorrow by sacking them for no reason?”

@elnathan_john, ”These are the godly people. This is your daddy. What irresponsible nonsense. So you should fire a person because of your lack of self-control? Are there labor laws in this country? Or does Jesus override this? In the words of Christian philosopher Kanye West: that aint Christlike.”

@ozzyetomi, ”Imagine minding your business and someone brands you a devil because they decided to crush on you.”

@SheisBoki, ”So a poor woman has lost her job because your son doesn’t know how to check himself? How many women will you sack? When does your son take some responsibility?”

@Adunni_Achebe, ”I’m not even surprised people are defending Pastor Adeboye.It’s the norm.Nigerians will contort themselves into unbelievable positions b4 they’ll admit any fault in their religious leaders.”

@TWEETORACLE, ”With all due respect, I beg to differ with Pastor Adeboye’s stand on this one. The lady in question doesn’t deserve a sack.It’s your Son that should learn to control his self better in an office environment or better still move the lady to another department.That’s about fair.”

@Tife_fabunmi, ”I just read Pastor Adeboye thread and I am not satisfied with the man sacking the woman because he couldn’t control himself, instead he could have helped her secure a job in another place or change her dept and as for the other tweets below, it’s facts but that first tweet.”

@cliqik, ”Pastor Adeboye asked his son to fire his secretary because he couldn’t control the ecstasy of working around her.An innocent woman lost her job for nothing and people are replying, “More grace to Daddy.”I don’t understand, grace to fire more innocent people?”

@Zaddy_nomso, ”Pastor Adeboye you told your Son to fire a Lady that is innocently working to make ends meet, she should be rendered Jobless for no reason.”

@William_Ukpe, ”I don’t blame Pastor Adeboye for that stupid tweet. Your spiritual leaders are also disconnected from reality. That’s why In a period of mass youth unemployment. Baba thought he could post that rubbish. I mean when church funds your lifestyle., Why should you care about a youth?”