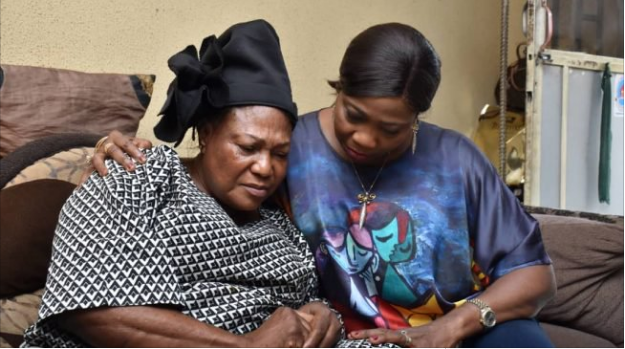 Abike Dabiri-Erewa, chairman of Nigerians in the Diaspora Commission (NIDCOM), on Saturday, paid a condolence visit to the family of the Nigerian medical doctor who was killed in Ukraine, last week.

The deceased, Gbolade Ejemai, was allegedly murdered by one Victoria Popvrako, a 36-year-old Ukrainian and mother of two.

During the visit to the family in Egbeda area of Lagos state, Dabiri-Erewa assured the bereaved that their son will not die in vain.

“We have written to the Ukrainian police and their foreign affairs ministry to conduct thorough investigation into the matter,” she said.

“If they have not been investigating (such gruesome killing of Nigerians) before, with this one, they will begin to investigate.

“This is a government that believes every Nigerian matters, and we want to assure you that your son will get justice even in death.”

On Tuesday, the commission had reported that Nigerian embassy in Ukraine engaged with both the host ministry of foreign affairs and the police department in Kharkiv over the tragic incident.

TheCable had reported that on August 9, Ejemai honoured an invitation to Popvrako’s house (unknown to him that it was a trap), where he was said to have been stabbed twice in the stomach, and then hit with a hammer on the head.

He was taken to the hospital but he died after two unsuccessful surgeries.

The final year medical student of Kharkov International Medical University, who had lived in Ukraine for 10 years, and is survived by a mother and sister.