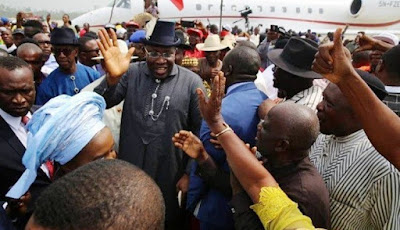 Gov. Seriake Dickson of Bayelsa says his preferred candidate for the Sept. 3 primary of Peoples Democratic Party (PDP) will emerge among his loyalists in the Restoration camp of the party.

Dickson, in a statement issued in Yenagoa on Tuesday, said that the leadership of the Restoration caucus would decide on an aspirant to support in the primary before Sept. 3.

More than nine of the 21 aspirants jostling for the PDP ticket ahead the Nov. 16 governorship election pledged allegiance to the Restoration camp led by Dickson.


The governor said that supporting any aspirant of the PDP outside the Restoration camp was one “heavy moral burden’’ he was not prepared to carry.

He also hinged his decision to support a Restoration aspirant on the imperative of continuity, effective service delivery and commitment of Restoration caucus to the socio-economic growth of the state.

Dickson dismissed those accusing him of refusal to support some aspirants, insisting that it was his right to decide who to back in the primary.

He also urged the members of the party to ignore the rumour masterminded by some political interests that the newly elected local government party chairmen and councillors were not qualified to be delegates in the election.

He said that there was no law in the PDP that prevented elected local government officials from becoming delegates in the primaries.

“We have agreed to elect a candidate for our party from the Restoration team. I will fail in my responsibilities and values if I abandon those who have supported me, who have been through thick and thin with me.

“My support will go to a loyal, committed member of the Restoration team. Not to do so will leave a very heavy moral burden in my heart which I am not prepared to bear,’’ Dickson said.

The governor said that he was not a bystander in the process to elect his own successor but a key stakeholder to support any candidate of his choice for the collective good of the state.

He advised the party members not to succumb to propaganda and blackmail calculated to sow seeds of discord within the party.

He noted that the newly inaugurated committee’s mandate involved the mobilisation of the delegates both at the ward and local government headquarters for the task ahead.

He said that the supporters and key players of the Restoration team which recorded a resounding electoral victory over the opposition in the last election were intact.

He urged the people to be resolute in their support for the leadership of the Restoration team even in the face of glaring blackmail by some persons with the intent to rubbish them.