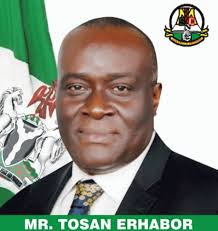 Federal Government has confirmed the appointment of Mr Tosan Erhabor as the substantive Registrar/CEO of Medical Laboratory Science Council of Nigeria (MLSCN).

This was contained in a statement signed by the Head, Corporate Affairs Unit of MLSCN, Mrs Fidelia Ginikanwa, on Monday.

Ginikanwa said the Registrar, who is 55-years-old, hailed from Edo and attended the School of Medical Technology, University of Benin Teaching Hospital in Benin City, Edo.


According to her, Erhabor later got a master degree in medical laboratory science with specialty in hematology from Ambrose Alli University, Ekpoma in 2003.

She said Erhabor is a seasoned medical laboratory scientist and civil servant with 27 years working experience.

He started his working career as a lecturer in 1992 at the school of Medical Laboratory Sciences, University of Benin Teaching Hospital, Benin, Edo.

He rose through the ranks to become director and head of department, External Quality Assurance (EQA).

She said he became the Acting Registrar/CEO of MLSCN after the demise of late Mrs Olufunke Omotuyi, on June 15, 2016 being the most senior ranking officer as at that time.

A post he held tenaciously before his confirmation as substantive registrar of the council on Aug. 19, effective from June 9, 2019 by the governing board of the council.

He is married and blessed with five children.

The appointment was renewable after four years.