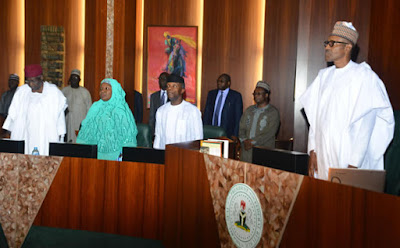 There are indications that President Muhammadu Buhari may send the list of his ministerial list to the Senate next month.

A former minister, who served in the first term of Buhari’s government, said he believed that the President would send the list in order to avoid the mistake of the past when he waited for six months to appoint ministers in his first term.

Besides that, the minister stated that the President was aware of the schedule of the Senate when its members would resume from break on July 2.

The senators are expected to begin a two-month break on July 26.


The source also said that none of the former ministers was sure of returning to the cabinet when reconstituted by the President.

He said, “We have the rumour that the President might submit the names of the new ministers to the Senate early next month.

“I think he is aware that the Senate will embark on another round of recess before the end of July.  So, he will have to send the list to the senators as soon as they return on July 2.

“Though our party, the All Progressives Congress, controls the National Assembly, I don’t think it will be cost-effective to summon the senators for the ministerial clearance after they might have gone on another break.”

Asked if he had been contacted by the Presidency to resubmit his curriculum vitae for possible reappointment, he answered in the negative, adding that “the President is the only person who knows who will return.”

Meanwhile, the Presidency, on Saturday, refused to speak on when Buhari would send the much awaited ministerial list for the Senate’s consideration before the lawmakers proceed on a two -month recess on July 26.

The Senior Special Assistant to the President on National Assembly Matters, (Senate), Senator Ita Enang, declined comments when contacted by our correspondent.

Asked if the President would send the list before the annual two-month recess of the National Assembly, Enang said, “Thank you for the question. Thank you so much.”

The National Assembly members will resume next week Tuesday, July 2 and sit for three weeks after which they will proceed on their annual two-month vacation from July 26.

The implication of this is that if the President fails to submit the ministerial list to the Senate before July 26, the nation may have to wait till the end of September to know the new cabinet members.

However, a ranking senator told one of our correspondents on condition of anonymity on Saturday that the senators could cut short their recess to attend to the list whenever the President decided to send it.

He said, “There is really no cause for alarm because we can always attend to the list anytime it is sent to us.

“I do not really think we should mount pressure on the President to hurriedly put up his cabinet that would not perform. The secret police would have to do their work.

“We can always wait for the due process to be concluded. We can screen the nominees anytime their names are sent to us, even if we are on vacation. We can reconvene in the national interest.”