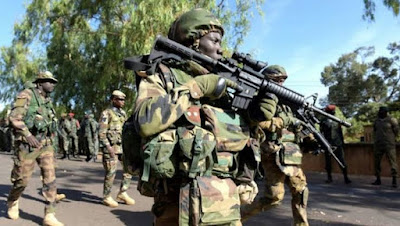 The 32 Artillery Brigade of the Nigerian Army (NA) Owena Barracks, Akure, has deployed the use of technology to fight the scourges of kidnapping and banditry within the Ondo and Ekiti States axis.

The Brigade Commander, Brig-Gen Zakari Logun Abubakar, disclosed this on saturday during the launching of a high tech drone device in the Osi community in Akure North Local Government Area of Ondo State to combats the criminal activities in the vast forest of the two states which has become a den of kidnappers.

Abubakar explained that the drone, a Phantom 5DGI, procured by the Army would assist the military formation of the Anti-kidnapping Squad in identifying the movement and activities of suspected bandits, kidnappers and other criminals.

According to him, the device which would also help the survey targeted areas in the two states is the latest technology in aerial surveillance and can cover up to seven kilometer radius with capabilities of recording and transmitting report back to the base.


He said “There are thick forests in these states and that is the advantage some of the criminals are using because some of the places you cannot penetrate them easily. So in line with the Chief of army Staff directive to have a responsive Nigeria Army in the discharge of its constitutional role, we decided to use technology in addition to the Anti-kidnapping Squad. We have two of this drone, one for Ondo and the other one for Ekiti State which would easily help us to fight the issue of this kidnapping headlong.”