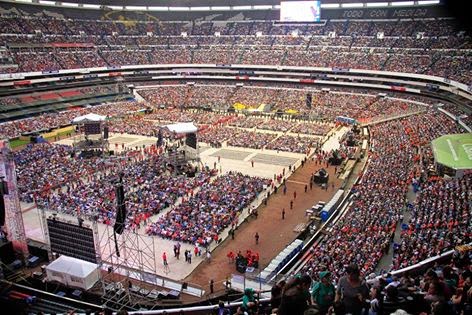 The prestigious Aztec Stadium in Mexico City played host to a ‘Miracle Crusade’ with renowned African Pastor T.B. Joshua on Friday 8th and Saturday 9th May 2015. 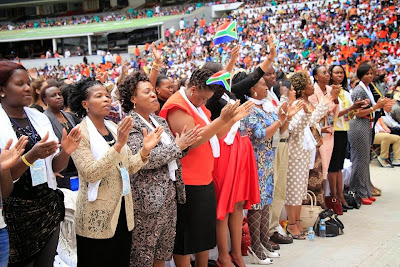 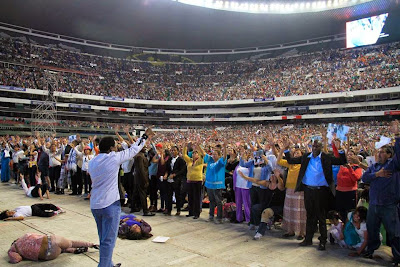 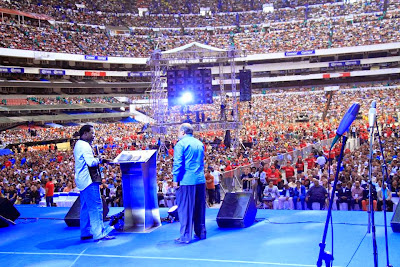 The venue, which can hold well over 100,000 people, was filled with the sound of praise and worship led by American Gospel artists Cece Winans, VaShawn Mitchell and Alvin Slaughter, pre-empting the arrival of the Nigerian cleric, famed for his allegedly ‘miraculous’ exploits.

Joshua, who was on his first visit to Mexico, emphasised on love in a simple message he reiterated on both days of the crusade.

“Love has a language that transcends all languages, all barriers and all distance,” he told the crowd, his every word interpreted into Spanish.

“No wonder we are here today sharing the good news of the Gospel, irrespective of differences in language, tribe and race.”

Joshua then began ministering to the afflicted within the huge crowd, praying for dozens of wheelchair-bound invalids who immediately began walking, much to the delight of the spectators.

The cry of ‘Cristo vive’ meaning ‘Christ lives’ became the ‘anthem’ of the event, greeting each ‘miracle’ that unfolded as people threw away crutches, hearing aids and oxygen tanks at the prayer of the ‘prophet’.

Even a sporadic downpour of rain during the Friday event seemed unable to dampen the crowds spirits or hinder the cleric's movement.

T.B. Joshua, who has nearly 200,000 YouTube subscribers and is followed by 1.5 million people on Facebook, led the masses in prayer against spirits of ‘witchcraft’ during the crusade’s second day, the result bringing ‘holy pandemonium’ throughout the stadium.

Hundreds ‘possessed’ by evil spirits ended up sprawling on the floor while many more were shaking uncontrollably and vomiting out unusual substances.

“I am lucifer,” an attractive Mexican lady garishly cried out amidst the prayer as her body contorted, clearly under some uncannily dark influence.

“She seduces men with her eyes and destroys them,” Joshua informed the crowd before tapping the lady who fell instantly to the floor and then bewilderedly arose, thanking God for her ‘liberation’.

Mexican media called the event ‘unprecedented’, citing that such huge numbers of attendees were unheard of where the main draw was not a sporting event or musical celebrity.

“It is noteworthy that at all times, it was clarified that the glory was not for men but for the Almighty,” one Spanish journalist wrote in his online review of the event.

Joshua capped off his visit by addressing and praying for over 4,000 pastors and leaders at the World Trade Centre in Mexico City on Monday 11th May 2015.

Several of those who had been ‘healed’ at the crusade shared testimonies after which the Nigerian ‘Prophet’ guided some Mexican pastors in praying for the sick and ‘prophesied’ into their lives.

An estimated 200,000 people attended the two-day crusade, including dignitaries from 14 nations and several Mexican government officials.

Invited guests included nearly 30 family members of South Africans who tragically lost their lives in a building collapse at Joshua's church in Lagos in September 2014.

The event was also broadcast live on the Christian television network Emmanuel TV.