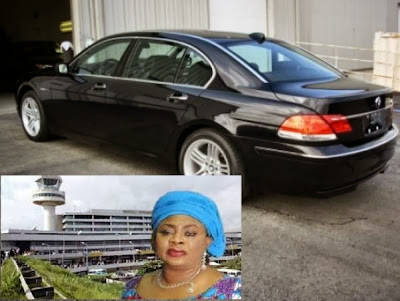 Nigeria’s Aviation Ministry have decided to go after its official that allegedly leaked the information of the purchase of two armoured vehicles for the minister, Stella Oduah.


The cars, valued at N225m, were purchased for the minister by the Nigerian Civil Aviation Authority.

The Director-General, NCAA, Capt. Fola Akinkuotu, disclosed this at a press conference at the head office of the Federal Ministry of Aviation in Abuja on Friday,

He said, “I am not saying that this particular information should not be put in the public domain. But how it was obtained is the concern. If somebody breaks into an office and makes copies of official documents, then the break-in has become criminal.

“So we are in the process of trying to find the source of this leakage and I am very concerned about it. Because this information may look trivial but there are other information that we have that are confidential and it is only fair for us to respect the confidentiality of information. I am not saying that they broke into our office, but they obtained the information illegally.”

The visibly terrified Akinkuotu said he was stunned to see the documents in the open, stressing that the information were leaked illegally.

He said he was “shell shocked that government information and particularly information from the civil aviation authority has gotten into public purview in an illegal manner. It is criminal! However, what has been done has been done, but I think when such information is gotten, you should have come to the agency to ask. We are not shy to take your questions.”

Akinkuotu stated that Snowden of the United States ran away after leaking confidential information, adding, “He (Snowden) went on the run after putting such information in the public domain. The sources of the leak I don’t know, but yesterday, I issued a circular to all staff on this issue. I will read a little part of the circular: ‘Without prejudice to the nature and the purpose of this act, you should know that leakage and ultimate publication is a matter of great concern to the authority.’

NCAA had purchased two vehicles valued at a whopping $1.6m said to have been delivered to Oduah in August this year. The armoured vehicles, BMW 760 Li, were bought from Coscharis Motors Limited in Lagos.

An online news medium, SaharaReporters, had reported on Tuesday that the armoured vehicles were delivered to the minister in August.

The medium reported that documents in its possession showed that the transaction for the purchase of the two BMW cars started in June, but the request for the delivery of and payment for them was fast-tracked between August 13 and 15, 2013.

The transaction involved the NCAA, First Bank of Nigeria, and Coscharis Motors Limited, according to the report.

Since the report, Nigerians have expressed anger over the purchase with stakeholders calling on the nation’s anti-corruption agencies to investigate the issue.

There were also reports that the vehicles’ costs were grossly inflated and a waste of the nation’s scarce resources especially in a sector that is poorly funded and which had recorded a series of air crashes in recent times.

But the NCAA boss stated that the purchase of the vehicles followed stipulated due process, adding that the prices of the cars were high probably because it was bought from a company which had no competitors in Nigeria.

.The agency also said other factors might have contributed the high price, but maintained that the vehicles were purchased for operational purposes. Explaining what may have made the vehicles expensive in Nigeria, Akinkuotu said three factors should be considered.

He said, “First, each car that you buy nowadays has a customised aspect to it and this may impact on the price. The other factor is what I call the environmental situation. Yesterday, a gentleman from Britain met me and said the fares in this country on British Airways and Virgin Atlantic are high. And he wondered why the situation had continued, but he said it was because Nigerians could afford it.

“So the other aspect in this particular context is what I will call the monopolistic situation on these cars. Coscharis, as far as I understand, is about the only guy that sells BMW of this nature in Nigeria. If he is the only one selling, then you must buy from him if you want the car and he can name the price. So those are factors that may have resulted. But mind you, I am not holding brief for this.”

He went on, “I do not know how much the cars cost and I cannot relate or answer the question on the actual cost of these cars. But were they budgeted for? Yes.”

The DG said aviation was a global industry and the NCAA, the regulator of the industry in Nigeria very often played host to dignitaries from international civil aviation bodies.

He said it was internationally customary to convey the minister and these visiting foreign dignitaries in security vehicles whenever they are in Nigeria.

He said, “It must be noted that during such visitations, the security of members of the delegation is the sole responsibility of the host country. The vehicles are therefore in the pool of the NCAA for these special assignments and are available at the NCAA office and can be shown to you.”

Meanwhile, Nigerians have continued to express their dissatisfaction with the agency’s action.

The External Relations Manager for most automobile firms including CFAO Motors, Dr. Oscar Odiboh, said the price of the new vehicles was outrageous, describing it as an embarrassment to those operating in the nation’s automobile industry.

“It dents the image of the automobile industry because we are being branded as people who fix ridiculous prices for their products,” he said.

Also, the Executive Secretary, Nigerian Auto Manufacturers Association, Mr. Arthur Madueke, said it was needless to have ordered for armoured cars abroad when such facility was available locally.

“One of our members, whose factory is located in Ode Remo, Ogun State, has the competence to armour any vehicle at competitive prices and has received the approval of necessary authorities including the ministry of defence,” he said.

Also aviation experts are of the opinion that the whole transaction was fraudulent and ridiculous.

President, Aviation Roundtable, Captain Dele Ore, said that the prices quoted for the armoured vehicles were on the ridiculous side.

He said, “By the information that I have at my disposal, I can categorically say that a single armoured vehicle cannot be more expensive than N40m. the amount of N225m which was quoted as the prices of the two vehicles was definitely outrageous.

“Well, in my opinion, it is fraud, the whole thing is just fraudulent, and it is rather unfortunate.”

Also, reacting to the issue, the Assistant General Secretary, Airline Operators of Nigeria, Mr. Muhammed Tukur, said that the N225m quoted for the procurement of the vehicles was exorbitant.

He expressed surprise that he ministry officials could expect Nigerians to believe such lie adding that it was important for the necessary government agencies to step in to address the issue.

He said, “That price that they have stated cannot be right, they have inflated the price. It is obvious that there is something wrong somewhere, and we hope the relevant agencies such as the Economic and Financial Crimes Commission will step into the matter and do a thorough investigation.

“The fact remains that there is a lot of corruption going on in the sector. Now, we are just talking about the Nigerian Civil Aviation Authority, we have not yet talked about other agencies such as the NEMA, FAAN, NIMET and others.

“All the funds that were said to be spent on restructuring the facilities of the airports for instance, we have not seen much to show for it, the Kano and Kaduna airports have been abandoned, the terminals in the Lagos airport still leak during rains, toilets are not working well, among other things. And so, corruption is entrenched in the system.”

Meanwhile, the law firm of human right activist and Lagos lawyer, Mr. Femi Falana (SAN), has petitioned the Economic and Financial Crimes Commission, urging it to investigate the Aviation Minister, Stella Oduah for fraud and extortion.

In the petition signed by Samuel Ogala, made available to NE on Friday, the law firm described Oduah’s case as an outrageous prodigal action.

The petition states, “Apart from the fact that the said threat to the life of the minister was never reported to the police, the extortion of the sum of N255m from the NCAA, a parastatal under the Ministry of Aviation, is fraudulent in every material particular.

“Specifically, the said sum of N255m was not appropriated by the National Assembly while the officials of the NCAA who authorised the expenditure of the sum of N255m exceeded their approval limit.”

Falana’s firm knocked the minister for abuse of office and threatened to approach the court to compel EFCC to investigate.’’