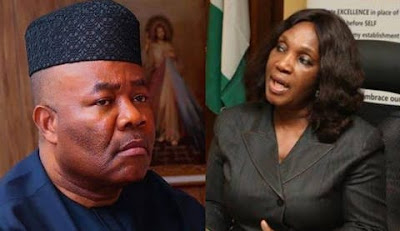 The Socio-Economic Rights and Accountability Project has asked President Muhammadu Buhari to set up a presidential investigative panel to probe corruption allegations in the Niger Delta Development Commission.

The not-for-profit organisation also urged the President to suspend the Minister of Niger Delta Affairs, Godswill Akpabio, and all those involved in the allegations pending the outcome of any such investigation.

SERAP said a special panel was necessary to probe the agency as the investigation by the National Assembly has been “controversial and has turned into a ‘dirty fight’”.

This was contained in an open letter dated June 18 and signed by SERAP Deputy Director, Kolawole Oluwadare.


In the letter, SERAP asked the presidential panel, if set up, to probe the allegations that the NDDC spent N81.5 billion on travels, condolences, consultancy and public communication between January and July 2020.

The letter partly read, “SERAP also urges you to instruct the police authorities and security agencies to immediately end the harassment and intimidation of Ms Joy Nunieh, former Acting Managing Director of NDDC, or any other witnesses and whistle-blowers. Suspected perpetrators will escape justice if witnesses and whistle-blowers are intimidated, harassed or threatened.

“These are extremely serious allegations. Nigerians expect that those who run the NDDC should be free of corruption, and should enjoy no impunity. Nigerians who want to see development and prosperity in the Niger Delta will want you to take the lead to get to the bottom of these allegations and take appropriate and decisive action to address them.”

SERAP also said the special panel should work closely with anti-corruption agencies that would “protect the integrity of the forensic audit, remove the possibility of obstruction of justice, and interference in the process by those suspected to be involved in alleged corruption in the NDDC.”

“Your government should send a strong message of intolerance for grave corruption in the NDDC, and show that you are willing and able to enforce important constitutional, statutory and international principles and obligations,” the letter added.