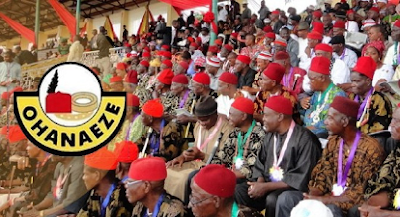 An attempt by the Chairman of the Southeast Governors’ Forum and Governor of Ebonyi State, Chief David Umahi to reconcile both factions of Ohanaeze Ndigbo has ended in a stalemate.

It was gathered that the meeting, which held at Imo State Government Lodge also had in attendance Gov. Hope Uzodinma of the State.

A source hinted that the Chidi Ibeh-led Ohanaeze was invited by the governors with the hope of prevailing on them to back down for the Amb. George Obiozor-led Ohanaeze.

The source, however, said Ibeh and his team refused to step down, insisting that they remained the authentic Ohanaeze national executive members.

Also at the meeting were Chief Emmanuel Iwuanyanwu, Obiozor, Chief Gari Igariwey, among others.