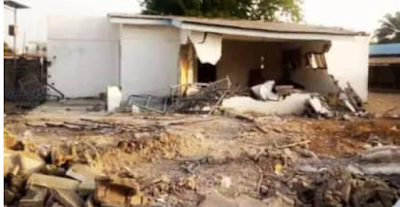 A high court sitting in Ilorin, the Kwara capital, has struck out the case brought against the state government by Asa Investment Limited, a private firm said to be owned by Olusola Saraki, father of Bukola Saraki, former senate president.

“Ile Arugbo”, known to be the political home of the former senate president’s father, was demolished by the state government in January 2020 following the revocation of the land.

Abdulrahman Abdulrazaq, Kwara governor, had said the land which was originally designated for the construction of a secretariat and parking lot of the civil service clinic, was illegally allocated to Asa Investment Limited.

But Saraki tackled the Kwara government and approached the court, claiming that the land was duly allocated and a right of occupancy title issued on it.

In August 2020, the court lifted the interim injunction restraining the state government from carrying out construction works on the land, following the failure of Akin Onigbinde, counsel to the claimant (Asa Investment Limited), to attend court sessions.

At the proceedings on Tuesday, Abdulazeez Ibrahim, also a counsel to the claimant, brought an application seeking to substitute the name of the second claimant, Sanusi Babaeleku (deceased), with one Abubakar Oluwatoyin. The application was granted.

Ibrahim also sought for an adjournment to enable him prepare his witnesses.

The request for adjournment was opposed by Salman Jawondo, Kwara state counsel.

Citing several instances when the case was stalled at the claimant’s instance, Jawondo said the adjournment request is a deliberate attempt to delay the hearing and dispensation of the case.

Abiodun Adewara, the judge, agreed with the state counsel and struck out the Saraki’s case for “lack of diligent prosecution”.

He then fixed March 17 to hear the defendant’s counter claims.