US Secretary of State, Pompeo releases photos of Iranians who ‘threaten America’ daily 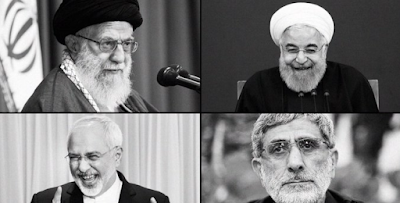 Pompeo’s disclosure comes as the Donald Trump administration counts down to the end of its tenure with the inauguration of President-elect Joe Biden on January 20.

“Let’s talk Iran. The men in these photos threaten America and Israel nearly every day,” @SecPompeo captioned a blend of photos tweeted on Tuesday.

Amongst the four men whose photos were posted by Pompeo include Iran’s supreme leader Ayatollah Ali Khamenei as well as the late Qasem Soleimani, a top general assassinated in a US strike on January 3, 2020.

Top Iranian authorities including Khamenei has since vowed that all those involved in his killing would face retribution.

Days after Soleimani’s killing, Iran launched a volley of missiles at Iraqi bases housing US and other coalition troops, with Trump refraining from any further military response.

The enmity between Iran and the US assumed another dimension when the Donald Trump administration slammed Iran with numerous economic sanctions after quitting a nuclear deal in 2018.

“Thanks to our sanctions, Iran’s proposed military budget is down 24% this year. We’ve targeted more than 1,500 individuals and entities, depriving the regime of $70 billion that would’ve been used to fund terrorism, ballistic missiles, and nuclear program,” Pompeo tweeted.

He added, “The United States will never allow the world’s largest state sponsor of terrorism to freely buy or sell planes, tanks, missiles, and other kinds of conventional weapons.”