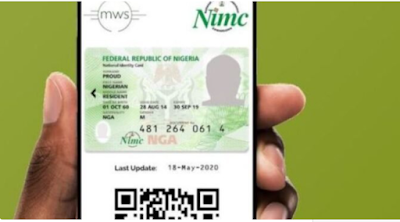 The agency had earlier announced that NIN generated by the BVN can be used after it has been updated at the NIMC enrollment centre.

The biometrics capturing part of the registration can only be done at the NIMC enrollment centre.

In a tweet on Tuesday, NIMC said the NIN registration must be completed despite NIN generation through BVN.

The agency warned that an incomplete registration will hinder the user’s access to the NIMC mobile app and render the NIN-SIM integration invalid.

“You must complete your NIN registration even if your BVN has generated a NIN,” the tweet read.

“If your NIN was generated due to the BVN record harmonization with the National Identity Database, you will not have access to the NIMC mobile app and your NIN-SIM integration will be invalid. Visit an enrollment centre to complete NIN registration.”

The Nigerian Communications Commission (NCC) had asked all telcos to disconnect the SIM cards of persons who have not integrated their NIN with their phone lines by the end of January.

Isa Pantami, minister of communications and digital economy, had said an application is available to help Nigerians link their NIN with up to seven phone numbers.

But NIMC warned Nigerians to adopt caution while downloading the mobile application for linking NIN with SIM cards as fraudulent applications are now available on the internet.