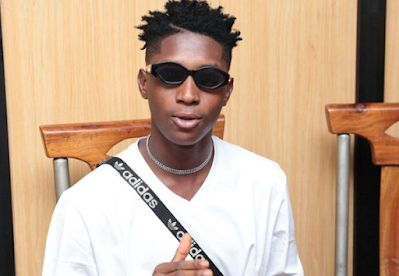 ‘Cash app’ singer,  Bella Shmurda, has debunked reports claiming that he was drunk during a recent stage performance.

On Tuesday, a certain video surfaced on social media platforms where the singer appeared to be performing at a show under the influence of alcohol.

Some  of the social media  reports had claimed that the videos were from his recent outing in Asaba, Delta state while others said it was from a show in Ibadan, Oyo state.

Reacting in a post on his Instagram story, the 23-year-old singer quelled the reports, stating that nothing of such happened.

“Be careful with false information. Verify your news before putting it out,” he wrote.

The fast-rising singer also took to his social media platforms to share a clip from his outing at the Oyo state capital to further buttress his point.

“My view of the show at Ibadan,” he had written in a terse post accompanying the video on his Twitter page which he also shared on Instagram.

The video has, however, garnered different views on social media.

“Omo Bella Shmurda needs serious management, before drugs will ruin him, his show at Asaba was an eyesore, he was too high to even perform. Talent without good behaviours and good management will be a waste of talent at the end of the day,” a user wrote.

“Why are people dragging Bella Shmurda He demonstrated what he sings on stage You were dancing and yelling Cash App, the artiste that sang the song clearly went on stage intoxicated which his lyrics had spelt out Myopic for dragging him, He just personified his song on stage,” another user wrote.