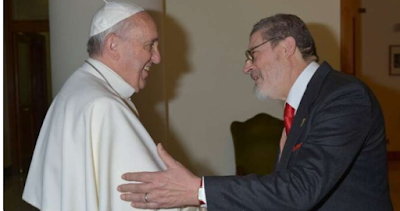 Soccorsi was said to have died at the Gemelli Hospital in Rome, L’Osservatore Romano, the Vatican newspaper, reported on Saturday.

He was reportedly receiving treatment for “oncological pathology” at the hospital before his death.

According to his profile published by the Vatican, the 78-year-old was appointed as the pope’s personal physician in 2015.

His daughter, Cristiana, is also said to have died in 2017 after a long-term illness.

Meanwhile, Francis has said he will receive the COVID-19 vaccine in a few days.

Speaking in an interview with Italy’s Canale 5 Channel on Saturday, he urged everyone to receive the vaccine to ensure that they protect themselves and everyone else.

“It is an ethical duty to take the vaccine. Here in the Vatican, we will start next week. I am also in line to take it,” he said.

“There is a suicidal denial which I cannot explain, but today we have to get vaccinated. I believe that ethically everyone should take the vaccine.”

As of January 10, 2021, more than two million cases of the coronavirus have been confirmed in Italy.

However, while 1.6 million people have recovered, over 75,000 deaths have been recorded.